Fort Tuthill is a place of history and memories, both old and new. Named after General Alexander M. Tuthill, the fort once served as the annual field-training site for the 158th Infantry Regiment Arizona National Guard from 1929 through 1948, before being turned into a county park in 1955. What was once the site of national guardsmen training during the summer months, has since turned into the fairgrounds for the annual County Fair and a gathering place for many events. The site was in need of much repair, however.

In 2002, Coconino County voters, through the County Parks and Open Space (CPOS) tax initiative, authorized the Parks and Recreation Department to acquire open space, develop parks, and make improvements to existing parks. The renovation of historic portions of Fort Tuthill was one of the projects identified on the ballot. You may be wondering, what's the big deal with this renovation project? The $4.1 million renovation project illustrated the challenge of updating a park and recreation site while retaining historical integrity (Fort Tuthill Historic District is on the National Register of Historic Places), all while remaining open to the public.

On March 22, 2016, CCPR staff and the design consultant held a workshop to update stakeholders and the public on the status of Fort Tuthill Historic Quad Renovation Project. Fourteen people attended the workshop and provided input on architectural details including possible interpretive signage, entry monument features and a memorial garden.
Check out the conceptual plans on the Quad Renovation:
Construction is in multiple phases, and renovation of the Historic Fort Tuthill Quad will enhance existing uses and events, while growing the County Fair and other events. Kinney Construction Services serves as contractor.

The Fort Tuthill Quad Renovation project began in May 2016. First up, the demolition of the stage on the fairgrounds. We had some great memories of that stage, the Main Stage at the Coconino County Fair, but it was old and dilapidated and needed to be replaced.

Next, work crews were on-site directing traffic as they saw-cut the roadway near the FUTS trail and the Cochise Ramada. They took down the tennis court fence, and work crews installed the storm drain along Fort Tuthill Loop Road with a concrete headwall reinforcement. They also constructed an access road and converted the tennis courts to an accessible parking lot to support the Fair and other events.

KCS installed manhole covers, catch basins, and performed grade work along the new area that is an extension of the FUTS Trail. We see a lot of runners, bicyclists, and walkers using the FUTS Trail at Fort Tuthill, so this extension will be popular with them, as well as with people heading over to the Amphitheater to catch a show.

On September 13, 2016, the Coconino County Board of Supervisors approved Phase II of the historic Fort Tuthill Quad Renovation. Phase II encompassed a new surface to the historic Quad, home of the annual Coconino County Fair, that consisted of decomposed granite (DG) sections and concrete walkways.

The walkways feature chevrons, or insignia, used by the military for rank designation, sandblasted into the concrete, thereby tying in the military history of the fort. The DG sections focus future event organizers into areas where tents can be placed and tied down. Other features include a courtyard green space and seating area, shade trees along the sidewalks, landscape improvements, lighting and site furnishings.

In January 2017, KCS resumed work on the Quad Renovation Project. KCS removed some of the old asphalt and dirt in the historic quad area. Additionally, they set up temporary power lines to supply electricity to the Administration and Annex Offices while they upgraded the electric services to the entire Quad area.

KCS continued with their work on the historic Fort Tuthill Quad renovation in mid-January. The team removed sewer services on the west side of the fairgrounds, as well as an abandoned water line in the same area. They removed bollards around the propane tanks, and moved the chain-link fence along the north side of the fairgrounds. Finally, KCS successfully moved electrical services for the Administration office to temporary poles that were installed earlier.

What to do with all the snow? That's the question KCS had to figure out with record-setting snowstorms in late January. KCS crews plowed the historic Quad clear of snow in order to continue work above- and below-ground. They stacked snow in the north parking lot and managed to keep ahead of the weather. In addition, KCS removed the porch and roof from the "Cold Storage" building, which CCPR uses for file storage. The porch and roof were not original to the historic building.

KCS milled the old asphalt on the fairgrounds where it was re-purposed throughout the park in various projects. Workers used milling machines to rip up the asphalt down to 2 feet, and then loaded the materials into dump trucks where the millings were stockpiled onsite for future use.

KCS continued their work on the Quad by clearing out the rest of the asphalt piece by piece. They also removed the sportsman’s building, a relatively recent structure that was not historic and that was located between two of the mess halls.

KCS built and aligned trenches for storm drains and new waterlines, as well as catch basins for the drains. Contractors installed seat walls along the new east entry to the Fairgrounds. The seat wall is veneered in brick with an architectural concrete cap and backed by a row of trees to provide a pleasing entry and place of respite for Fair-goers and for other events attendees.

Two of the historic fence columns that run along the eastern perimeter of Fort Tuthill County Park were moved to the Historic Quad in summer 2017. The 1930s era columns were salvaged from ADOT roadway construction several years ago and are now located between the two buildings housing the Fort Tuthill Military Museum. They will feature in the Museum’s historic interpretation of the fort.

Workers poured concrete walkways and put the new fencing in place. Over 30 trees and landscape plants were placed in the Fort Tuthill Historic Quad. Additionally, new drinking fountains and a park bench, as well as building signage that highlights the battalions when the space was the training site of the Arizona National Guard, were installed. 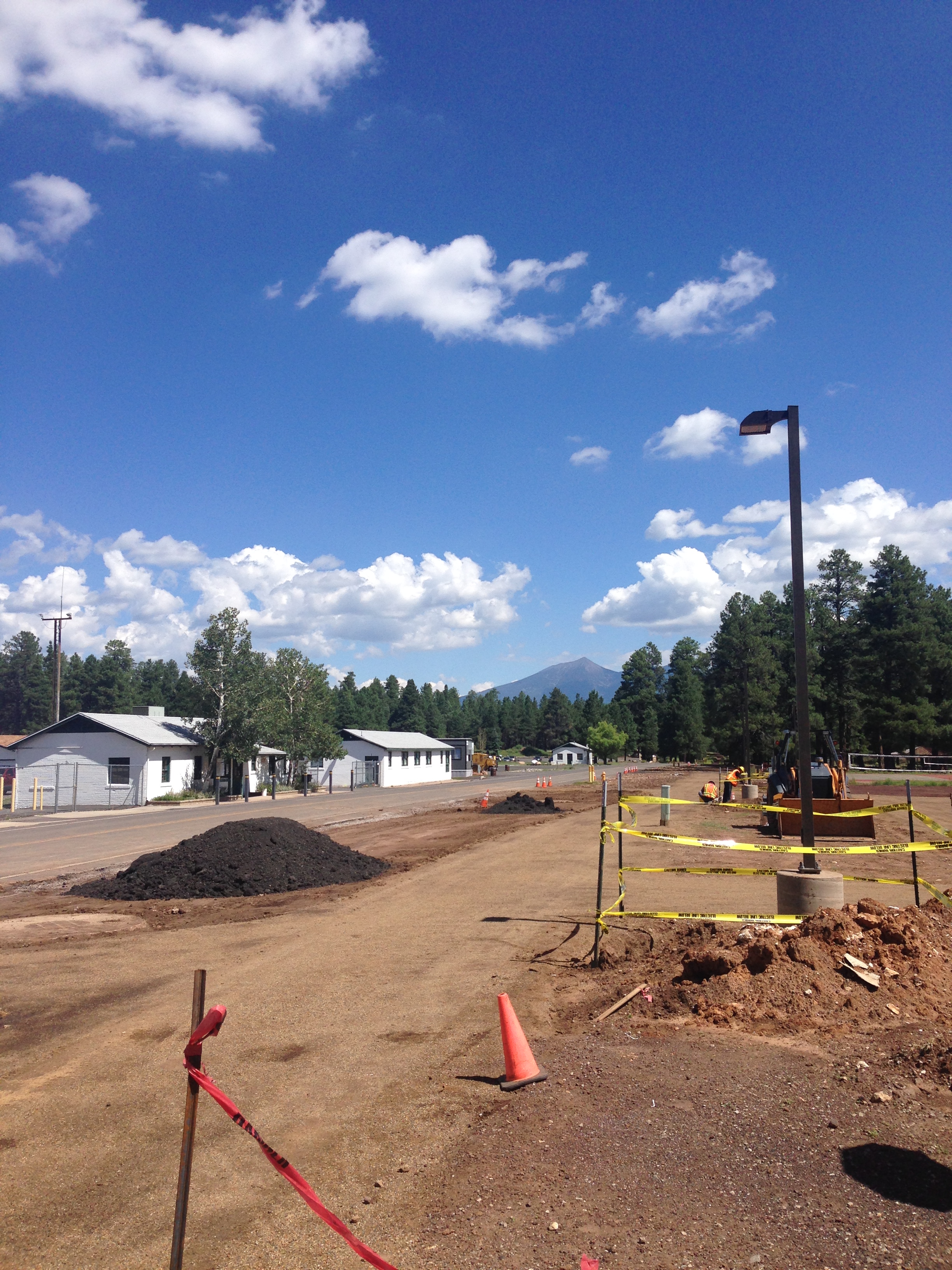 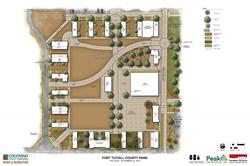 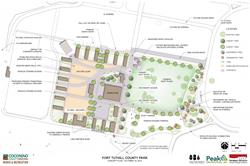 The Coconino County Board of Supervisors (BOS) approved, on its first day of session in 2013, the vision and concept of the Fort Tuthill County Park Master Plan. Recommended by the Parks and Recreation Commission, the plan identifies the following development and improvement components:
The approved master plan is a result of over a year of public input process involving stakeholders, focus groups, Parks and Recreation Commission, the Board of Supervisors, and the general public. It is anchored on the following guiding principles: 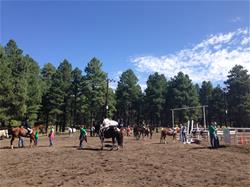 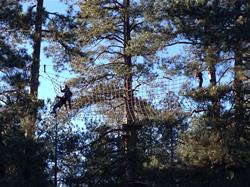