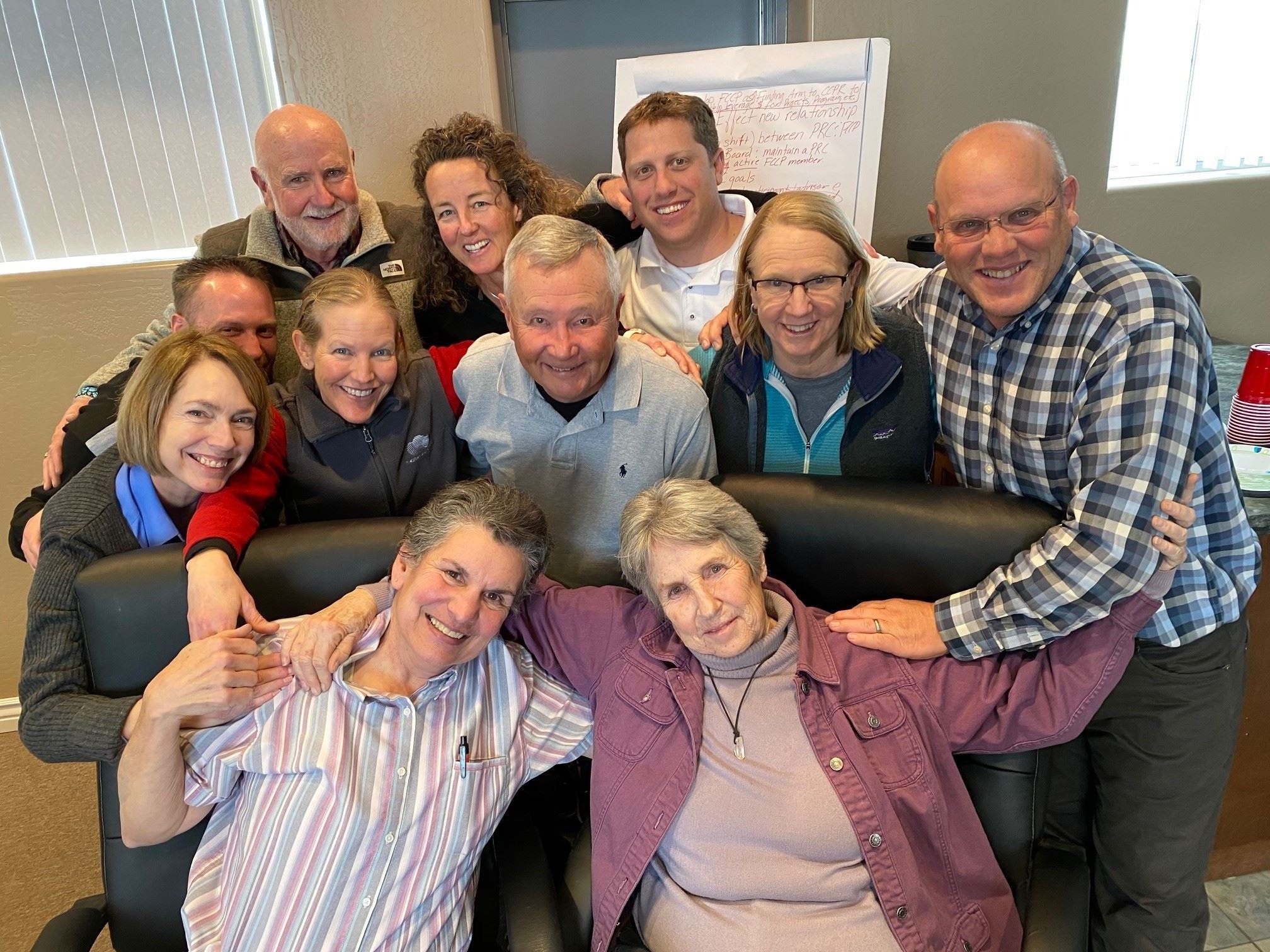 The commission meets monthly and special meetings are held on an as-needed basis. Read membership details below:

The purpose in establishing the Coconino County Parks & Recreation Commission (PRC) is to provide a citizen body responsive to the communities and people of Coconino County and to recommend policy regarding the development and operation of a well-balanced system of parks, programs, trails and events. 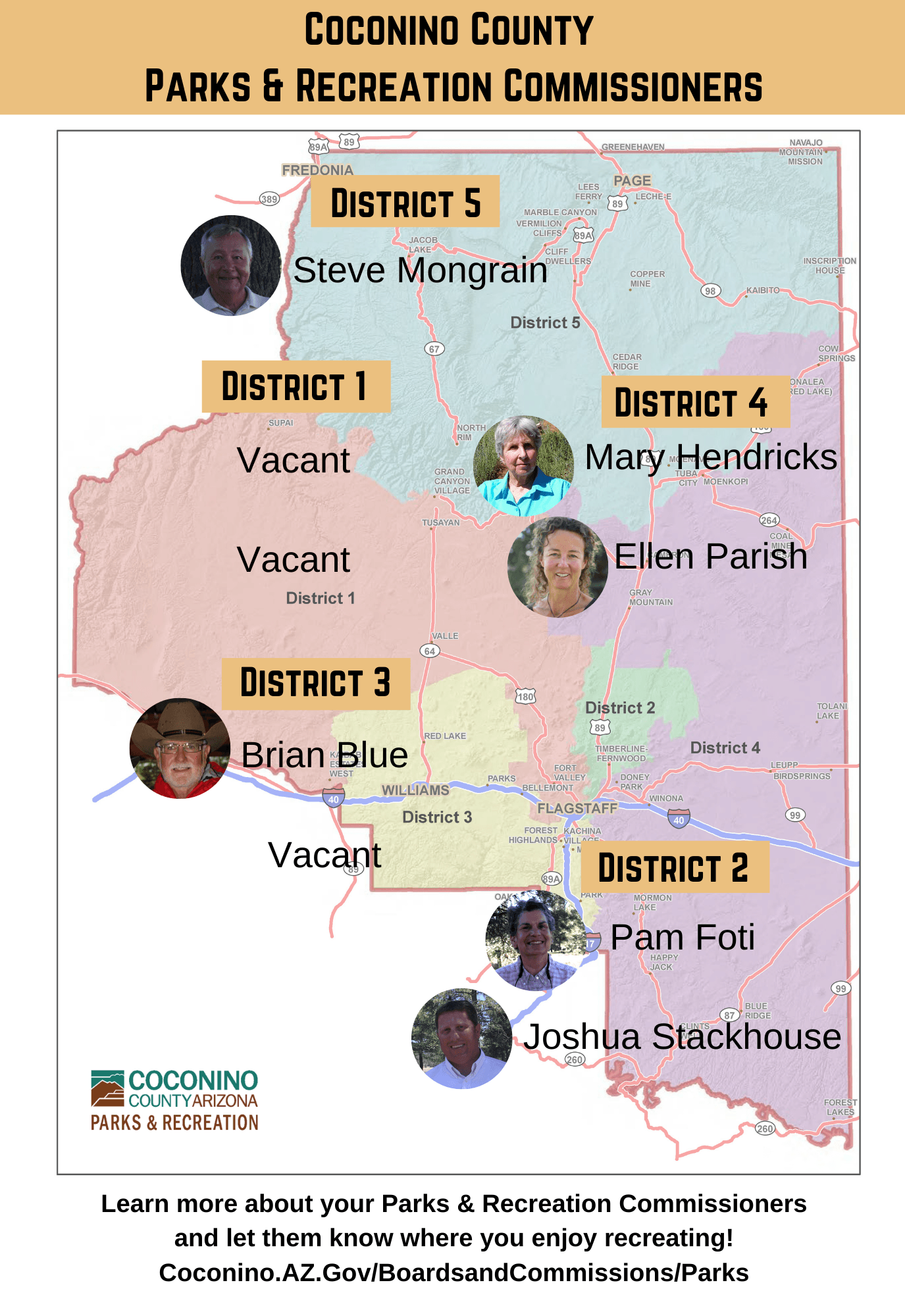 Beth Tucker
Beth served 37 years with the University of Arizona, first in Holbrook, and then later in Flagstaff beginning in 1977, where she served as an Extension Family and Consumer Sciences Educator and County Director until retirement in 2013. Her most notable Extension programs included co-parenting workshops for divorcing parents; followed by step-parenting workshops; a children of incarcerated parents’ community initiative and an eleven-year educational effort to assist grandparents who are raising grandchildren. Her Coconino Extension team piloted and published a “Simulation Workshop for Agencies about Grandparents Raising Grandchildren” followed by another workshop entitled “Children with Incarcerated Parents.” The “Raising Up Grandchildren” program was honored by the Casey Family Foundation and 4-H Strengthening Family grant as a worthy national effort. These workshops have been replicated in Arizona and other states. She has a long history of helping residents and businesses adjust recipes to high altitude to increase food preparation successes. Beth also has done extensive community development work, primarily with women’s cooperative groups, in countries such as India, Zimbabwe, Ethiopia, Kenya, Ukraine, and Uruguay.

Pam Foti
Pam was born and raised in Columbus, Ohio, and graduated from Ohio State University in Parks and Recreation. Pam received a master’s degrees from the University Nevada-Reno, a doctorate in in the Department of Urban and Rural Planning in Environmental Studies from University of Wisconsin-Madison, and a second master’s degree in public administration. After graduating in 1987, Pam landed a job as professor and served as chair of the Department of Parks and Recreation for six years with Northern Arizona University until she retired as Emeritus Professor June of 2018. Her passion in research took her to studying human impact monitoring with many of her undergraduate and graduate students in the southwest with National Parks Service, National Forest Service and Bureau of Land Management plus some private, non-profit preserves. She has been the president of the Arizona Parks and Recreation Association and served six years on the State Parks and Recreation Commission. Presently, Pam serves on the Coconino County Parks and Recreation Commission, Friends of Monuments and the Board of ACE. Pam is an avid hiker and loves to bike. She shares her life’s explorations and research passions with her spouse of 31 years, her two sons, her dogs as well as hundreds of her students over the years.  Pam’s hope is that the work that she has done has helped to preserve our public lands and create a love of the outdoors.

Brian Blue
Brian was born and raised in Phoenix, AZ, and graduated in 1970 from Northern Arizona University in Flagstaff. After a career in San Francisco, Brian and his wife Ann moved back to Flagstaff, AZ in 2007.  Brian is currently serving as a commissioner of the Coconino County Parks and Recreation Commission, treasurer of the Grand Canyon Historical Society, a docent for the Museum of Northern Arizona, and serves on the Board of Coconino CASA for Kids and has been a CASA for the last four years.  Brian enjoys tennis, bike riding, kayaking, horseback riding, hiking and most other outdoor activities.

Michelle Wesson
Michelle moved to Flagstaff in 1995 from the Los Angeles area to attend NAU. Always a lover of the outdoors, Michelle quickly discovered the many trails and magnificent outdoor spaces she had only ever dreamed of. She recognized how fortunate she is to Flagstaff home and has raised her two children here. Michelle is grateful for all that Flagstaff has given her and for the opportunity to work with the Coconino County Parks and Recreation Department as one of the Commissioners for District 3.

Mary Hendricks
Mary is a long-term resident of District 4 and a retired geologist from the United States Geologist Survey. Her special interests include equestrian events at Fort Tuthill County Park, the Coconino County Fair (including the 4-H Livestock Auction) and representing the needs of rural populations. She finds it a privilege to serve as Commissioner and be part of the growth and responsiveness to the diverse communities in developing a system of parks, programs, trails and events in Coconino County.

Ellen Parish
Ellen moved to Flagstaff in 1991 to attend NAU. She fell in love with Northern Arizona, married her high school sweetheart, and they have raised their two daughters here. Her passion for the outdoors, open and wild places, horseback riding, hiking and gardening has led to her involvement with a variety of community-minded organizations. She currently serves as the chair for the Coconino County Parks and Recreation Commission and enjoys learning about the issues facing the county and the people who live throughout its diverse and unique regions.


Steve Mongrain
A resident of Page, AZ, Steve was appointed by Supervisor Fowler to the Coconino County Parks and Recreation Commission, District 5, in November, 2017. Prior to his retirement to Page in 2014, Steve owned and operated a print brokerage company for over twenty years in Las Vegas, NV. He was very active in the North Las Vegas Chamber of Commerce where he served as president in 1998. He also served nine years as president of the Board of Directors for the Mojave Desert Heritage and Cultural Association, a non-profit, historical organization centered in the Mojave Desert. He is a member of the Page Parks and Recreation Advisory Board. He helps to administer the Regional Trails Alliance, an initiative developed by Supervisor Fowler, and he enjoys woodworking, hiking, and golf. His wife, Mary, regularly volunteers her time at the Circle of Page Community Food Pantry.