What is the Downwinder Program?

The United States conducted nearly 200 atmospheric nuclear weapons development tests from 1945 to 1962. Essential to the nation’s nuclear weapons development was uranium mining and processing, which was carried out by tens of thousands of workers. Following the tests’ cessation in 1962 many of these workers filed class action lawsuits alleging exposure to known radiation hazards. These suits were dismissed by the appellate courts. Congress responded by devising a program allowing partial restitution to individuals who developed serious illnesses after exposure to radiation released during the atmospheric nuclear tests or after employment in the uranium industry: the Radiation Exposure Compensation Act.

The following fees are charged to cover the cost of providing information to the public: Note: The process to receive this information may take up to 30 days to complete.

The Act presents an apology and monetary compensation to individuals who contracted certain cancers and other serious diseases:
Areas Impacted

Although the Four Corners Region (Utah, Colorado, New Mexico, and Arizona) residents have filed the majority of RECA claims, the program has awarded compensation to individuals residing in each State, as well as several foreign countries. The claimant population includes several Native American tribes. The program regularly engages in outreach to the Navajo, Hopi, and Yavapai Apache Indian reservations to meet with Tribal leaders, conduct town hall meetings, and assist members filing RECA claims. The map below illustrates the areas covered by the ACT. 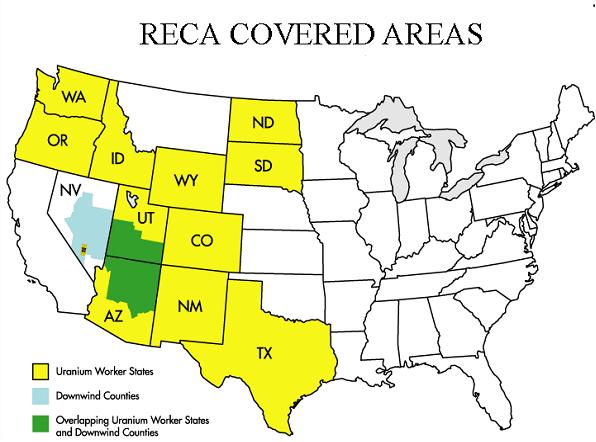