The Museum Fire Post-Fire Flood Risk Analysis was conducted in the fall of 2021 to provide an updated and detailed snapshot of the current hydrologic and hydraulic conditions of the Spruce Wash, which was impacted by the 2019 Museum Fire. The fall 2021 analysis reaffirmed that the threat of flooding is real, and that, due to the fire, flooding can result from even moderate-sized rain events. Conducting regular flood risk analyses of the area impacted by Museum Fire post fire flooding is necessary to gauge changes in the watershed’s hydrologic and hydraulic conditions from the previous monsoon season. This information is used to refine both emergency response protocols and the functionality of flood mitigation measures.

The model used for the fall 2021 analysis makes several assumptions. First, a uniform rainfall is assumed throughout the watershed. Realtime events will vary in rainfall distribution, but the modeled rainfall provides an analysis that can be used to evaluate flooding potential for a given storm precipitation total. Second, the model assumes a ‘normal’ soil saturation level. During a monsoon season, soils may or may not be more saturated. If soil becomes more saturated later in the monsoon season, then the watershed could be more responsive and could result in higher flows. Third, sediment reduction or mitigation projects and emergency measures, such as sandbags and concrete barriers, are not included in the modeling.

The analysis showed that there was a change in the peak flow rate timing for water flowing over the burn scar. Modeled peak flow rates above E Linda Vista Dr. are approximately 6% higher than previously shown in the 2019 modeling. The model used in the analysis assumes a rainstorm over the entire watershed and the timing of peak flow rates can vary greatly depending on the actual rainfall patterns of a storm.

Lastly, the analysis showed that there are channel geometry changes that occurred during flood events within and below the burn scar from scour (erosion) and aggradation (build-up of sediment and debris). These changes to the channel geometry produced some noticeable differences in velocities (the speed of the water) and depths in the incised channels in and around the burn scar, changes in the timing of peak flow rates, and slight changes to flow patterns above Mount Elden Estates due to sediment and debris aggradation. It is important to remember that flood channel geometry can change even after small rain events. Eroded and incised areas of an impaired watershed can become deeper or wider, which will affect floodwater velocities. The Spruce Wash watershed will continue to change and evolve during future flood events and those changes are not reflected in the analysis.

March 2022: The City of Flagstaff will begin construction of drainage improvements in the Spruce Wash from Cedar Avenue to Dortha Avenue the week of March 21, 2022.

The work includes improvements to the open drainage channel between Cedar and Dortha and reconstruction of the drainage inlet in Dortha to increase capacity. This project is part of the overall Spruce Wash improvements in response to the unprecedented Museum Fire flooding that the community experienced during the 2021 Monsoon season.

Dortha between Main Street and Rose Street will remain closed to traffic and construction vehicles will be present in the neighborhood. Pedestrian and bicycle traffic will be restricted from the construction zone. Mail, delivery services, and trash/recycle services will be maintained and will remain on their usual schedules.

Typical work hours are Monday – Thursday from 7 a.m. to 5 p.m., with work on Fridays or weekends as necessary.

The Project is anticipated to be complete by June 30, 2022. Property owners are advised to keep flood mitigation measures (including sandbags and barricades) in place.

Thank you for your patience as we make these critical improvements to the Sunnyside community. Questions can be directed to Christine Cameron, City of Flagstaff Project Manager at 928-213-2682 or ccameron@flagstaffaz.gov 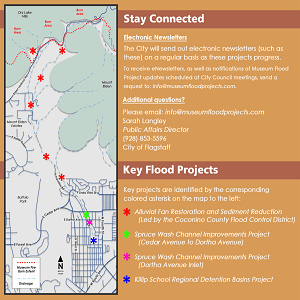