At an auction held on November 1, 2010 on the steps of the Coconino County Courthouse, Coconino County successfully bid on the acquisition of Rogers Lake, located ten miles southwest of Flagstaff. The auction was conducted by Arizona State Land Commissioner Maria Baier. 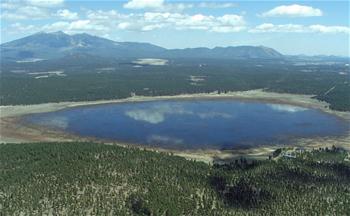 With funding from the 2002 voter approved Coconino Parks and Open Space (CPOS) program and a 2010 Growing Smarter Grant, Coconino County is able to protect and preserve 2,250 acres of land, including 1,400 acres of wetland. Rogers Lake is known for its significant natural and cultural resources and opportunities for incomparable wildlife viewing.

County efforts to acquire State Trust land at Rogers Lake began in 2002, immediately following voter approval of the CPOS initiative. Coconino County Parks and Recreation took the lead to file a petition for the acquisition of Rogers Lake, using the State's Arizona Preserve Initiative. This initiative set aside funding at the State level in the Land Conservation Fund, referred to as the Growing Smarter State Trust Land Acquisition Grant Funds. Over the eight-year acquisition process, the County made three amendments to its original petition.

In 2010, the State Land Commissioner reclassified 2,250 acres of State Trust lands at Rogers Lake as suitable for conservation, using the Arizona Preserve Initiative process. The County applied for Growing Smarter funds and was awarded $6,159,921.16 by the Arizona State Parks Board on September 15, 2010. These grant funds were used in combination with CPOS funds to purchase Rogers Lake.